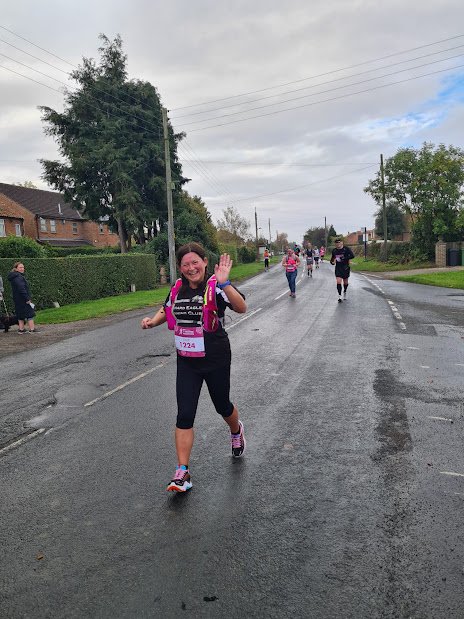 When I signed up for my first marathon, the distance scared me! The commitment of time worried me, but it was a personal challenge I was determined to achieve. As race day got nearer, injury hit me and I spent three weeks on the injury bench, getting increasingly nervous about the task ahead.

The morning of race day dawned – cold, wet and miserable! The journey to York with club was fuelled with excitement, nerves and lots of positive encouragement. I spent the hour before the race started willing the rain to stop, wandering around in anticipation…I just wanted to get going! The rain continued to fall as the hooter declared the start of the race – off we went!

My plan was to keep my pace between 11.30 and 12 minute miles: snail pace, but time was irrelevant even at this point. My goal was to get to the end and enjoy the experience. The first five miles were through the city centre then out into the suburbs. The running surface, although wet, was flat and even. The five hour pacers were just ahead of me. Could I keep them insight?

The miles ticked by and the weather improved and became perfect running conditions. By mile nine the field was pretty spread out and I found myself on my own…ish. The chatter had stopped, people were focused and probably thinking the same as me: it’s still a heck of a way to go. My pace was within my target range and I  had got to this point without walking😊.

I hit the half marathon point feeling a little anxious: the enormity of the distance becoming a reality. I had the same distance to go again! The route became a little undulating and my split times began to lengthen. It was time to put my music on.

As I came to the brow of what seemed the longest hill in history, I spotted my family which was just the boost I needed. They fed and watered me, told me I was amazing and sent me on my way with renewed energy. It was around this point that I lost sight of the five hour pacers.

Anyone who has completed this race before knows what’s coming next. Miles sixteen to nineteen are basically run down a hill and a run back up it. As I began my descent, I witnessed the pure exhaustion in my fellow runners faces as they reached the top of a never-ending climb. My pace slowed to over twelve minute miles and mile nineteen was a whopping fourteen minutes fifty-four seconds.

I was exhausted both physically and mentally. It was at this point I saw my family again. My emotions took over and took some time to compose myself for the remaining miles.

Thankfully the route now took me back into civilisation and crowds began to appear, shouting their support and encouragement. My pace was now around thirteen-minute miles. At mile twenty-one, I surpassed the longest distance I’d completed in training. From this point, I willed my legs to just keep moving and had a surge of adrenaline – I can do this!

Approaching mile twenty-five, my legs were screaming at me: each step was massive but I was so close.  Onwards, and literally upwards, that last mile. Then finally the twenty-six mile marker and I could see the finish line. From somewhere I found the energy to increase my pace and even managed a flying feet moment.

I crossed the line. I’d done it! As I placed my finishers medal over my head, a wave of emotions washed over me and I’m not scared to admit a tear or two ran down my face from my eyes.

I was now a marathon runner 🏃‍