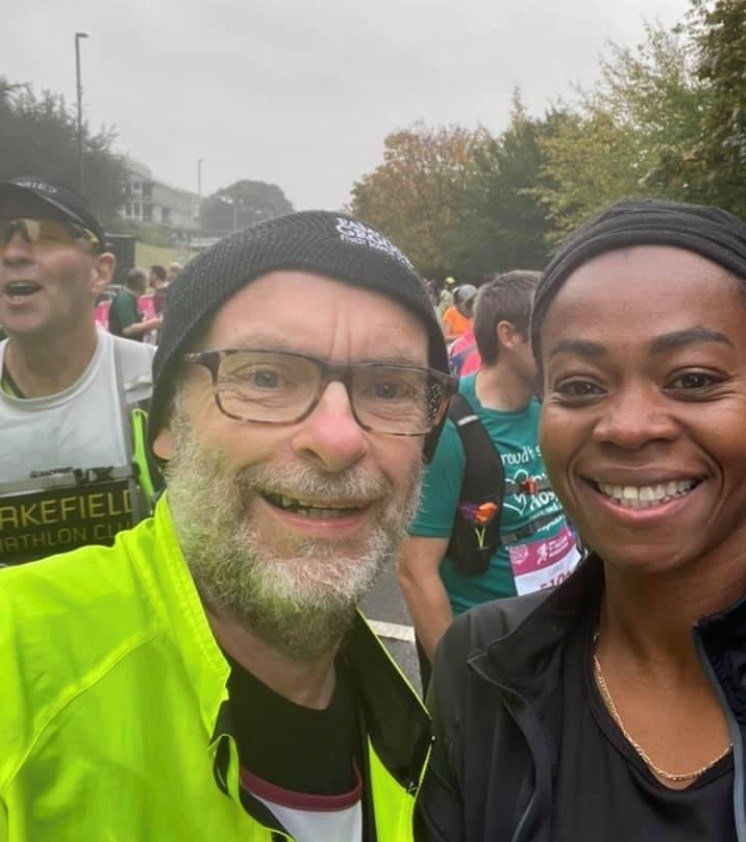 Ten years ago, I also ran the Middlesbrough 10k. Back then I was ten years younger but 5 minutes slower.

So, what has made the difference?

You see, ten years ago, prompted by being officially obese, with a BMI way north of 30, and with THAT look from my doctor, I had decided to take up some exercise: first walking, then running. It was not easy. I had spent over 50 years avoiding doing any running. However, I gradually got better and it benefitted me. I lost some weight and I felt better until the day I exacerbated an old knee injury, at which point I gave up.

Roll forward eight years and I was heading back to the state I had been in, and it was not a good place to be.

I took up running again. On my own. On cold, dark mornings, when no one could see me.

I acquired a Hearing Dog. I started baking. And I found Orchard Eagles Facebook page.

After a few months, I plucked up the courage to join an Orchard Eagles run around Acklam. And discovered that, in the flesh, the Eagles were smiling, friendly people.

Soon after, I joined the Orchard Eagles on two legs of the Coast to Coast Challenge. I struggled. But the Eagles did not abandon me. They stayed with me – the slow runner (maybe they were really after my lemon tray bake, but I was still impressed at their support).

I started running with other Eagles. It was fun. It was really good fun. Conversations. Laughter.

I still did solo runs.

I still had the usual problems with Strava and Garmin.

But I was not alone.

In December, I was part of the brilliant Advent Windows Challenge and was able to share my baking with other Eagles.

I decided to set myself some challenges: to run a 10k; to run the Great North Run; to run a marathon; and to raise funds for Hearing Dogs for Deaf People, in recognition of the change that had taken place in my life with the arrival of my Hearing Dog.

The 10k was down South, with no Eagles in sight, but their words of encouragement still in my mind. The GNR and Yorkshire Marathon, in September and October, were whole new experiences, especially the latter where I felt very definitely part of a club, with lots of Eagles, all looking out for each other. Suffice to say, I achieved my goals. I completed all three challenges and raised nearly £900.

The Eagles were with me every step of the way.

By November I was lighter, fitter, healthier and happier.

And then I saw that the Middlesbrough 10k was on again, and that a lot of Eagles were taking part.

I was not running for a charity. I was running for fun. As part of the Orchard Eagles community.

On a cold, windy but sunny November morning, I ran around the streets of Middlesbrough.

Somehow, and I am still not sure how, I ran faster than I have ever ran.

As an Orchard Eagle.